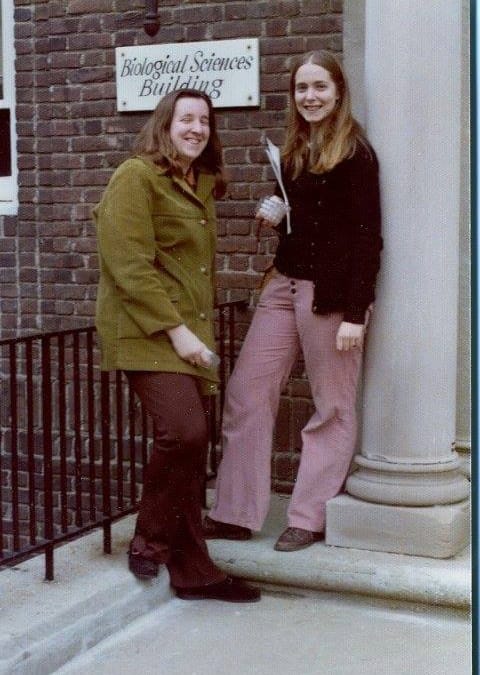 How did you learn about the field of genetic counseling?
I learned about genetic counseling from my family physician, who had cared for our family for a long time.  He mentioned that there was a brand new field called ‘genetic counseling’, which was the first I’d heard of it.  I really liked genetics in high school and decided to investigate.  A neighbor of mine in New York was married to an MD/ Ph.D. geneticist at Columbia.  We met, we talked, and I became much more interested in genetics from the biology perspective.  I learned that Rutgers had a program in genetic counseling and they offered me the opportunity to have a teaching assistantship, so I was able to afford the program. 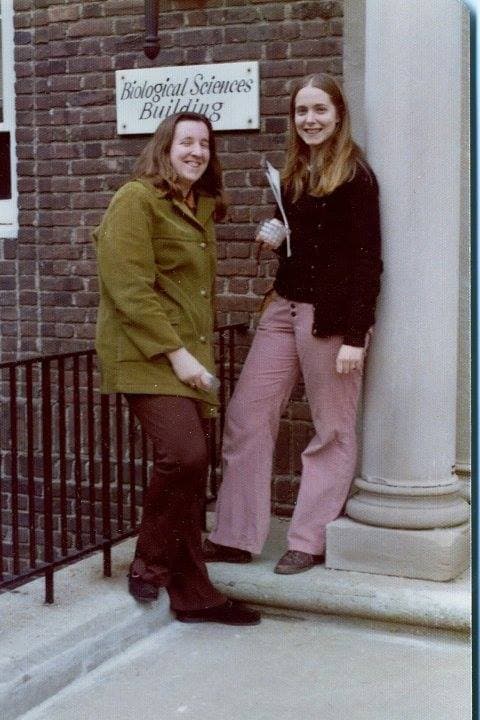 What was the Rutgers Program like at that time?
There were <10 people in my class, including Ed Kloza, and a diverse, incredible group of students.  Marian Rivas, Ph.D.  was the Director and Len Sciorra PhD. was the cytogeneticist, and they taught most of the classes.  I did my research in the laboratory of Francine Essien, Ph.D. – we also did bench work, at Rutgers, which was a great opportunity for me.  She was another one of my great female mentors.   We had some fantastic opportunities, including the chance to observe in Victor McKusick’s clinic at Johns Hopkins.  We also had rotations at the Woodbridge State School, which was a large facility for people with developmental disabilities. I saw my first patient with Lesch-Nyhan syndrome there and it was a profound experience for me.  Rutgers was then a 1-year program, and I then spent 6 months at Mount Sinai to get additional experience in the field.
Tell me about your first job.
I went to the University of Oregon’s Health Science Center as their very first genetic counselor in 1976.  There weren’t a lot of jobs available for genetic counselors, and I thought this would be an adventure to live out west.  I worked on a research study of eye disease, which included linkage studies on macular degeneration. I drove all over Oregon and collected blood, saliva, and urine for this study, often at scheduled family reunions.  I stayed in Oregon for a few years and then came back to the East coast, and eventually ended up at Columbia Presbyterian, where I worked in pediatrics.  A few years later I worked in a research lab doing gene mapping at Rutgers and then moved to Connecticut to work in another research laboratory before taking some time off to have children.  When I returned to genetic counseling it was in clinical work at the University of Connecticut, where I served for 31 years!
How has the role of the genetic counselor evolved?
The profession has changed alongside the increasing knowledge about genetics; so, we have a much deeper understanding of genetics across the lifespan in many areas of medicine.  The technology has evolved, and the ability to apply knowledge from all of these areas has too, and the genetic counselor can use all of that information.  Genetic counselors are leaders and innovators in many areas of medicine because of this.  The opportunities for genetic counselors have continued to expand because genetic counselors have identified new areas of need, and have the motivation and skills to more than fill those needs. The expectations of students have also changed; they now feel there are limitless opportunities because of their role models.
What advice do you have for new graduates?
Being a person who is dedicated and curious is key to a career in genetic counseling.  In this field, there are so many new things to continue to learn, embrace and understand – you need to be the kind of person who desires that kind of career path.  You need to be comfortable and confident in embracing change, knowing that this will require more work, more passion, and more understanding.  You must be willing to be lifelong learners.
What is your next act?
I’ve been asked to be a part of the BayPath Genetic Counseling program.  I’m very excited about this program and what it can offer to people all across the country.  I also plan to keep advocating for the profession of genetic counseling.
In addition, I am continuing to be active in local politics. I think that just as we are advocates for our patients in our professional roles, it is important to do that in our personal lives in our communities.

What else would you like to add?
In addition to having the privilege of providing patient care, I became involved in leading the efforts for licensure in Connecticut. I had not envisioned that role for me decades ago but it became clear that this was a mission to pursue. I was fortunate to work with Robert Greenstein, M.D. whose mantra was that ‘Being in the clinic isn’t enough’.  He believed you had to speak out for patients on their behalf, and that every single conversation was an opportunity for education and to develop an ally for your patient.  Knowing Bob Greenstein motivated me over the years to get involved, locally.  It is my way of being involved in public service.  One of the most rewarding things in my career has been to work with legislators as an advocate for laws that benefited the public with respect to genetic conditions, like expanding coverage for food and formula for patients with metabolic conditions, and genetic counseling licensure in the State of Connecticut.