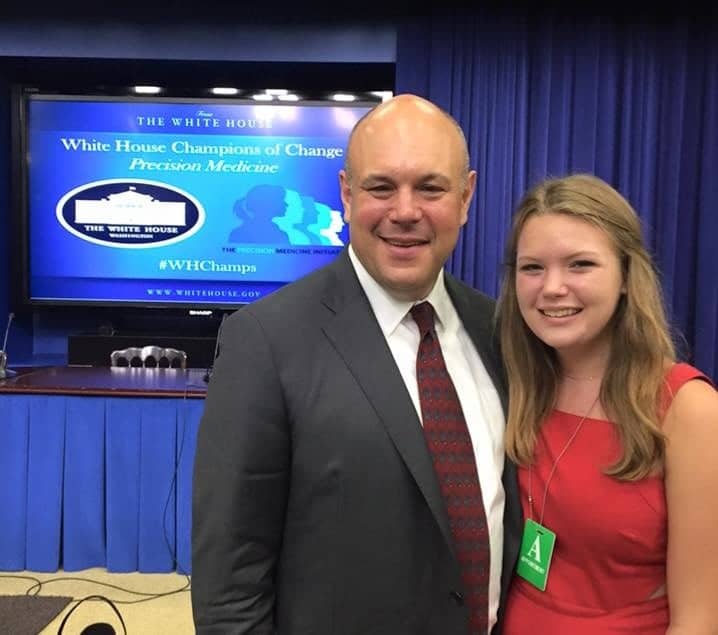 We recently sat down with Howard Look, President and CEO of Tidepool.org, a San Francisco-based non-profit, open source development organization dedicated to reducing the burden for people with Type 1 Diabetes. Here’s what he had to say about his organization, his personal experience with this disease and his recent trip to The White House!

Ellen T. Matloff: Congratulations on your Champions of Change Award!

Howard Look: Thank you, it was quite an honor and a bit overwhelming. I received an email from the White House asking if I could speak to them right before my family was leaving for vacation. It came out of the blue.

ETM: Was there a moment at the White House that was particularly memorable?

HL:There were several. I got to spend time with some of my heroes, like Hugo Campos, and other winners – it was humbling that someone thought our work was worthy of that kind of stage. Hugo and I were interviewed together at that location you always see on tv, where all of the White House correspondents stand. They also walked us past the West Wing and we saw a Marine standing outside, and were told that meant that the President was inside – which was pretty exciting.  My wife, daughter and I had an all-access pass into the Eisenhower building and we got to tour and see so many exciting things, including Joe Biden’s office! It was a great personal experience for all of us.

ETM: You have quite an impressive work pedigree! TiVo, Pixar and Amazon. How did your past experiences lead you to create Tidepool?

HL: I was working at Amazon in Cupertino, CA on a consumer electronics product when my daughter was diagnosed with type 1 diabetes (T1D), without warning. We have no family history of the disease. After her diagnosis, I did what Geek Dads do – which is to dive in and learn all I could about the disease and the on-going research. She was given an insulin pump and a glucose monitor, and I was impressed with how large, clunky, difficult to use, and outdated these devices were – and they didn’t talk to each other. I realized that no one in technology and development who understands modern software had every really thought about this specific problem in T1D. It was then that I began finding people passionate about T1D who also believed in open source, open data and being a non-profit startup. Another T1D family offered to give us our seed funding  I left Amazon and started Tidepool in March of 2013.

ETM: Where did you come up with the name ‘Tidepool’?

HL: We worked with a pro-bono naming and branding consultant to come up with the name Tidepool – it has great meaning to our project. We ended up with Tidepool because it reflects our mission: ‘pool’ = open source communities. ‘Tid’ = type 1 diabetes. The chaos of the ocean comes and goes, but when it goes out it leaves the tranquil experience of a tidepool – like bloodsugars that cause a storm, and then normalize and calm down.

HL: When and how was your daughter diagnosed?

HL: Katie was diagnosed in the summer of 2011 when she was 11 years old. We were on a camping trip just after she had started 6th grade, and we noticed that she got up three times in the night to unzip the tent and go to the bathroom. She had been very thirsty and was drinking lots of fluids, but this was the first time we’d noticed it so vividly. The next morning she had orange juice and pancakes, and then threw up. My wife decided to take her to the doctor and, as she’d suspected, Katie was diagnosed with T1D.

ETM: Being a parent of a child with type 1 diabetes, how could a system like Tidepool have changed things for you, and for your daughter?

HL: Managing T1D is really, really hard. People living with T1D may make 50-300 complex decisions every day. Many of these decisions are based on data. If you can acquire and access all of the data in one place at one time, it can make things a little easier. We can start thinking about automated tools that look for patterns to solve problems. We can also look at big data, between lots of patients with T1D. For example, we were at the California Pizza Kitchen and Katie ordered a 5-cheese margherita pizza.  We were trying to calculate how much insulin she should take, which is complicated. I thought, ‘We could have an app so Katie could see how other kids with T1D with her same insulin profile reacted to that pizza, and based her insulin dosage on those data!’.

We’re in beta with our first wave of software. There are hundreds of people using our platform now. We are also supporting a multi-center clinical trial and hope that soon we will be helping other people with T1D in a variety of ways.

ETM: What advice do you have for other people with an idea and a dream?

HL:Don’t assume someone else already has your great idea. Be bold. The world has changed – we have tools now that allow empowered patients and parents to do great things.  Find other people who feel the same way and do it with them.