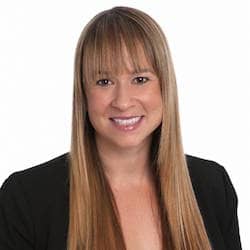 This is the third installment in our series, “Trailblazing Genetic Counselors”, in which we highlight genetic counselors who are pioneers in the field. Genetic counselors are health professionals with specialized graduate degrees and experience in the areas of medical genetics and counseling. Genetic counseling is a rapidly growing field offering professionals a wide range of opportunities, which we explore in this new series. Learn more on the National Society of Genetic Counselors’ new website, aboutgeneticcounselors.com.
To keep updated with conversations and news in genetic counseling you can subscribe to our Twitter list featuring the latest updates from over 330 professionals in the field, all in one stream.

NSGC
Erica Ramos, MS, LGC, @ERamosSD, is the 2017 President-Elect of the National Society of Genetic Counselors.
Ramos started her career as a research and teaching assistant at her alma mater, Southeast Missouri State University, where she received her B.S. in Biology. She joined the genetic counseling field after graduating from University of California, Irvine – College of Medicine with her M.S. in Genetic Counseling. After a few years in the prenatal setting at Genzyme Genetics, she became the Director of Genetic Services at Amigenics where she developed the My Health programs and the My Breast Health software. In this role she was the first hereditary cancer genetic counselor in Las Vegas, Nevada.
Ramos’ next title was as Illumina’s second genetic counselor hire. During her first two years at Illumina she was a Senior Genetic Counselor managing a team of three full-time genetic counselors. After being there for four years, the number of genetic counselors employed at Illumina rose to 15. Her current role at Illumina is the Clinical Lead for the Applied Genomics “Healthy Genomes” team, which centers on utilizing whole genome sequencing in clinical care by increasing access and information to healthy individuals through the Understand Your Genome program and MyGenome visualization software. She recently became an adjunct professor at Augustana University in their new Genetic Counseling Department. Ramos served as the Director-at-Large on the Board of Directors of the National Society of Genetic Counselors (NSGC) and we look forward to seeing her in the NSGC President’s role in 2017.

UCONN Health
Robin Schwartz, MS, LGC, has been a leader in genetic counseling since the field’s infancy, starting among the first genetic counseling students at Rutgers University. As a practicing genetic counselor for the past four decades she has experienced countless changes and expansions in the field, some of which she has impacted directly. She has co-authored over 20 research publications touching on an array of genetic counseling specialties including prenatal, hereditary cancer, pediatric, and direct-to-consumer genetic testing.
The last 30 years in Schwartz’s career has been spent at UCONN Health as an hereditary cancer genetic counselor. Her main role is to meet with patients individually to discuss their family history, personal risk factors for inheriting a hereditary cancer syndrome, genetic testing, and risk reducing measures for developing cancer. Prior to joining UCONN, she was a coordinator in Clinical Genetics at Columbia University and a research associate at Rutgers University. Over the years she has been a mentor to numerous students and regularly attends and presents at educational events. Her most recent role was as a judge at UCONN’s “An Hour In The Life Of A Genetic Counselor” event where interested undergraduate students tested their genetic counseling skills in mock sessions.
Schwartz is a Key Faculty Member of UCONN’s Professional Science Master’s Program in Health Care Genetics, among other UCONN Health committees. She is a member in many societies/organizations including her role as a charter member of the American Board of Genetic Counseling’s Advisory committee, a member of the American Society of Human Genetics, and a member of National Society of Genetic Counselors since 1979.

LinkedIn Profile
Kayla Mandel Sheets, MS, LGC, @VibrantGene, is one of few genetic counselors who also holds the title of entrepreneur. In 2014 Sheets founded her private practice, Vibrant Gene Consulting LLC. Her inspiration to join the field is rooted in her family’s struggles with genetic conditions such as autoimmune disorders, infertility and non-hereditary cancer. One of Sheets’ first hands-on genetic experience was as a Study Ambassador researching acute myeloid leukemia (AML) at the Fred Hutchinson Cancer Research Center. A few years later, in 2009, she graduated with her genetic counseling degree from the University of Utah School of Medicine. Settling in Massachusetts, she has had a variety of genetic counseling roles at Genzyme and Massachusetts General Hospital before starting her own private practice.
Vibrant Gene is “dedicated to providing personalized care for individuals and expert consultations to professionals”. Patients receive personalized genetic risk profiles, information about appropriate genetic testing options, and attentive interpretation of test results. To educate the public about genetics and health on a larger scale, she started her health and wellness television talk show, “The Vibrant Gene”, a year after founding her practice. Her other current roles include being a member of National Society of Genetic Counselors abstract review workgroup and the Vice Chair of the Genetic Counseling Board for the Massachusetts Department of Public Health.
Check back for the next episode of “Trailblazing Genetic Counselors” and read our previous episodes here!