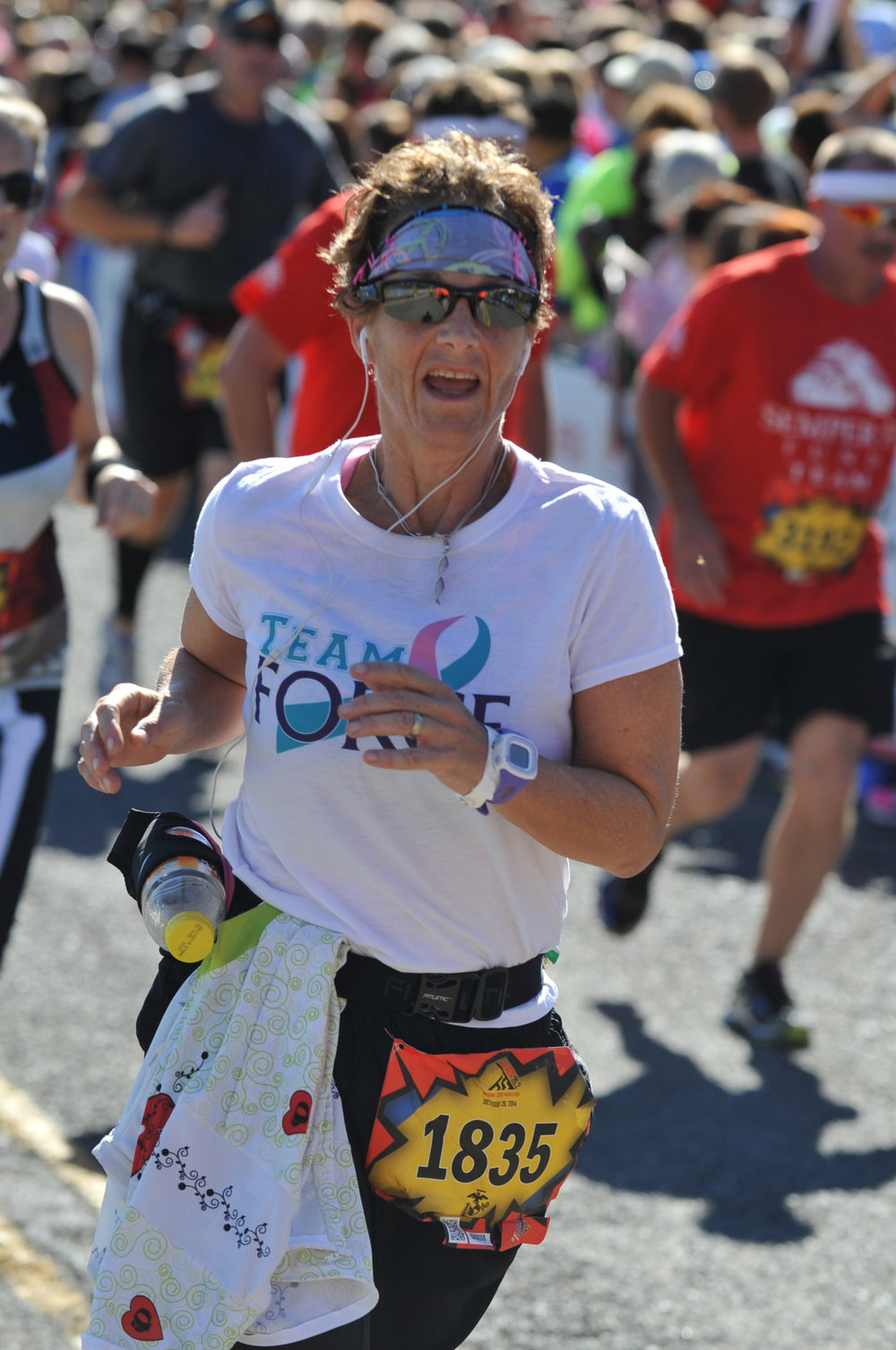 Sue Friedman is the Founder and the Executive Director of FORCE: Facing Our Risk of Cancer Empowered, a national non-profit organization dedicated to improving the lives of those with hereditary breast, ovarian, and related cancers.  Sue has been a well-known leader in the BRCA community for many years — this is a bit of her personal story.

When did you learn that you carry a BRCA mutation?

I was diagnosed with breast cancer at age 33 in 1996 and was told I had a multifocal DCIS.  I had no family history of cancer, but didn’t have a very large family.  I was told that my paternal grandmother had kidney cancer, but we really don’t know what her primary cancer was.

Genetic testing was new in 1996 and my original medical team never recognized that I was a candidate for testing.  Nine months after I had a unilateral mastectomy for my diagnosis I was reading a magazine article from a Jewish newsletter and learned that I may be at increased risk to carry a mutation because I’m Jewish and was diagnosed with breast cancer at a young age.  It was then I learned that ovarian cancer is part of the syndrome, and I wondered if my grandmother may have had ovarian, instead of kidney, cancer.  I brought the article to my doctors and they did the test – no genetic counseling, they just took my blood.  They asked me to call for results in 5 weeks, which I did.  I received no call back.  I then called back every day for 5 days.  On the 5th day I felt a lump in my armpit.  I had recurrent breast cancer. My original pathology was re-reviewed, and I learned that I actually had invasive breast cancer from the start.  I then found out that my genetic testing was never run.  I went for a 2nd opinion at MD Anderson and they offered me genetic counseling and testing.  In 1997 I finally learned that I was a BRCA2 mutation carrier.

What resources were available to you at that time?

There were very limited resources available to BRCA carriers in 1997.  Before my recurrence, I attended a breast cancer support group meeting at MD Anderson and told my story. A woman at the support group told me I hadn’t “experienced suffering”, because I had not gone through chemotherapy, as some of the others had.

Later, after my recurrence, by age 35 years old, I had undergone chemotherapy, radiation, two separate mastectomies and reconstruction, an oophorectomy and had gone through menopause without hormones.  I had sacrificed my fertility and my dream of having a second child. I wondered if I now was “deserving of support.”

This experience sensitized me to the issues that face previvors who, like me, needed support, even if it their experience was different than the average cancer support group. In my opinion there is no one out there who hasn’t suffered enough to deserve support.

What made you start FORCE?

It was very clear to me from my personal experience that there was a need for a place where people could access information, resources, and support. I also recognized that the culture needed to be inclusive of people in various stages of their journey.  At the time that I started FORCE, the community that now goes by the term “previvor” or survivors of a predisposition to cancer, needed compassionate support just like their survivor counterparts.  We needed better options and resources.

How has the field changed in this time?

It’s so exciting – in the past 20 years I’ve seen a lot of changes and they are making lives better.  There is greater awareness of genetic counseling and genetic testing, improvements in genetic testing, sentinel node biopsies (instead of full axillary dissections), better breast reconstruction, we’ve developed targeted therapies (PARP inhibitors), and new ones are on the way.  We still have a long way to go, but we have come so far together.  We are the pioneers here.

What has been the greatest challenge in running FORCE?

Funding.  I’m a veterinarian by training and had no business background, but I saw the need.  We’ve had volunteers along the way who helped tremendously.  One volunteer, with substantial business background is now our CEO. Barbara Pfeiffer has been an incredible and amazing leader, helping us grow our capacity and reach, implement metrics, build quality programs, and turn a mostly volunteer organization into a nonprofit with full-time staff.

Name one story that illustrates the greatest reward?

It happens every day, it is hard to pick one story. We’ve helped people appeal to their insurance companies when they’re told they can’t get genetic testing.  One woman had recurrent ovarian cancer and did not qualify for a clinical PARP trial.  A few weeks later, Lynparza received FDA approval for women with a BRCA mutation and ovarian cancer that had recurred after three previous lines of chemotherapy. We were able to  contact her to let her know about it and she was able to receive the drug.  Some people were on the fence about BSO, and received support, had the surgery and were diagnosed with early ovarian cancer instead of what could have been a later stage, more aggressive cancer if they had waited. There are so many success stories every day.

There are many strong advocates in the BRCA community on Facebook, Twitter, LinkedIn.  Does FORCE have any plans to try to invite those advocates to join forces with FORCE?  Do tell.

We know that the social media is strong and we will continue to try to engage those groups to the capacity that we are able. So many of our FORCE volunteers and members are active in these groups. We’ve reached out to several advocates and have invited them to be part of a focus group at our upcoming FORCE conference.

What are your hopes for the field in the next 10 years?

The development of Herceptin changed the landscape for Her2+ breast cancers and opened up targeted therapies for cancer treatment.  We hope the emerging data on PARP inhibitors will give BRCA carriers more options and that more targeted therapies are developed for people with inherited cancers, with fewer side effects. We are partnering with researchers on prevention studies with the belief that some day prophylactic surgery will not be the only option for effective cancer prevention.  One of our missions at FORCE is to prove to the research community that the hereditary cancer communities will be partners in clinical trials:  we will sign up, we will show up, we will be partners in this search.