A BRCA Mutation Was Found In My Tumor. Does This Mean I’m A BRCA Carrier? 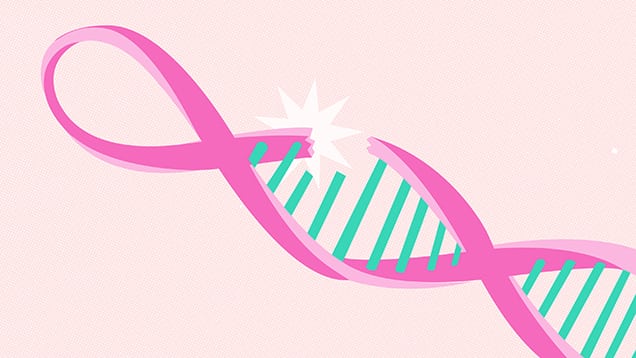 When we read about genetic testing in the mainstream media, we often think of the testing Angelina Jolie had, called germline genetic testing.  This analysis looks for genetic variants (differences) in our DNA that we are born with and are found in most of the cells in our body, including cells in the blood, saliva, and cheek cells, which are generally the samples tested.  A pathogenic variant, also known as mutation, is a harmful difference in a gene that may cause increased risk of cancer or other health problems. DNA is inherited from our biological parents -50% from our mothers and 50% from our fathers.  Genetic variants found in our DNA are often inherited from one or both parents and can be passed to children.
Somatic or tumor genetic testing is another type of genetic testing that has become more common over the past decade.  All tumors have genetic variants that cause the cells within the tumor to grow under its own control and ignore many of the natural checks of a normal cell.  Genetic testing on a tumor sample involves gathering cells from a tumor, usually by biopsy or surgical removal, and performing genetic testing on those tumor cells.  Analysis of the genetic variants from the tumor via this type of testing can lead to better understanding of the tumor and which therapy may be most effective.  Genetic variants found in a tumor often arise sporadically and are only in that tumor rather than in all of the other cells of a person’s body.  This testing is part of new precision medicine or personalized medicine approaches. Many companies, including Foundation Medicine, focus on somatic testing.
Genetic variants that are somatic are not inherited – but sometimes a genetic variant that is found on tumor testing is one that is actually in all of someone’s cells and was inherited.  In fact, the NCCN guidelines recently changed to include people who have a pathogenic BRCA variant detected in their tumor as candidates for germline testing.  This additional testing will help determine if they also have that pathogenic BRCA variant in the rest of the cells of their body*.

If a person has germline BRCA testing and  is positive for germline pathogenic BRCA variant:

If a person has germline BRCA testing and testing is negative:

Germline genetic testing is important when making informed decisions about cancer treatment (surgery and radiation decision-making), to determine whether someone is at risk for other BRCA-related tumors, and to learn whether family members are at increased risk to develop cancer.  Such testing is important to both men and women.
Keep in mind that pathogenic BRCA variants can be found in all types of tumors – including those outside the spectrum of BRCA cancers.  A person diagnosed with lung cancer, for example, could be found to carry dozens of pathogenic variants in that tumor, including a pathogenic BRCA variant.  Though lung cancer isn’t thought to be BRCA-related, that finding should still lead to germline BRCA testing.
Also keep in mind that there are hundreds of genes involved in tumor genetics, and BRCA1 and BRCA2 are only two of them.
In summary, as we learn more about precision medicine and somatic genetics, we will likely learn of more and more areas of crossover that may require genetic counseling and germline testing.
*NCCN Guidelines 2.2017.