Mark with his wife Stasha and son Alan

This article is part of a series built to highlight rare hereditary cancer syndromes. This is Mark’s story of living with Multiple Endocrine Neoplasia Type 1 (MEN1).
Genetic Counseling Note: Individuals with Multiple Endocrine Neoplasia Type 1 (MEN1) are at increased risk to develop more than 20 types of tumors, although the most common findings are tumors of the parathyroid glands, the pituitary gland, and the gastero-entero-pancreatic tract. Skin findings are often seen in MEN1. MEN1 is genetic, caused by a mutation in the MEN1 gene and is inherited from a parent ~90% of the time. A smaller percentage of individuals are the first in their family to have the condition (~10%). When this occurs, the mutation is thought to be new (or de novo). A person who has a mutation in MEN1 has a 50% chance of passing that mutation to a child with each pregnancy. 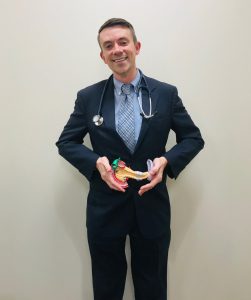 Since you last kindly posted about me, I have moved to Utah to be the director of gastrointestinal oncology for Intermountain Healthcare, a system serving multiple states in the Mountain West but predominantly Utah and Idaho.
Personally, I underwent a Whipple surgery to remove my dominant pancreatic neuroendocrine tumor. That operation occurred in August 2017 and my follow-up scans showed remnant tumors in my pancreas which I will continue to monitor over time. The only alternative was having my entire pancreas removed, which I declined even knowing tumors would otherwise be “left behind” because I would have instantly become a pancreoprivic diabetic.
All in all, the two experiences have enhanced my perspective and empathy as a patient-physician. I still haven’t undergone chemo but I do have a better understanding of the life-altering decisions those under my care have to make, and so I try to bring some hard-won lessons from my personal narrative to their counsel.
Tell us a little bit about yourself:
I was born in Scotland but moved to America with my family when I was 8. As part of the immigration process, we were all required to have chest X-rays to rule out tuberculosis, but my father’s X-ray instead revealed a rare form of lung cancer. His diagnosis and treatment thus became an unavoidably significant part of my upbringing. After he passed away when I was 14, I was driven to pursue a career in medicine, and in oncology specifically.
How did you first learn you had MEN?
When I was just starting my oncology fellowship, I developed abdominal pain that felt like appendicitis, but it was actually caused by a high calcium level (hypercalcemia). As soon as that lab result returned, I remembered hearing that my father had also suffered from high calcium throughout his life. I realized our hypercalcemia was likely hereditary in nature, and I asked my doctor to test me for hyperparathyroidism and MEN1.
Did you have a family history of MEN?
I was the first formal diagnosis, but in retrospect, I’m convinced that my father, paternal uncle, and paternal grandfather must have had MEN1, too. My 5-year-old son has inherited the MEN1 mutation from me.
What is the greatest lesson you learned as a patient that formed who you are as a physician?
I think I have learned to mitigate uncertainty. Much of my job as an oncologist involves helping my patients to comprehend risk/benefit ratios, meaning how to reconcile a reluctant willingness to incur toxic side effects with the understandable desire to gain control over a cancer. The calculus is different for every person and every clinical situation. No one in their right mind should want chemo; my role is to demonstrate why they might need it.
That said, I would not presume to place myself in the shoes of someone weighing the decision to accept chemotherapy, a choice I have not yet have to make. However, I do understand the balancing act between action and observation. In my case, the only way to ensure that my own pancreatic neuroendocrine tumors (NETs) won’t spread or metastasize would be to undergo a complete pancreatectomy, a huge surgery that would interrupt, if not end, my career as I know it. So far, that’s not a trade-off I’ve been willing to make, and so instead I adhere to a program of close surveillance. To some people, this inaction might seem like madness. To me, it’s an acceptable way that I can continue the work I find so meaningful & rewarding while still monitoring the greatest threats to my health & longevity.
Do you often tell your patients about your own diagnosis?  Why/why not?
I share it with a select few because I want our time together (always precious!) to be focused on them and not their doctor. That said, there are instances when I think it’s appropriate to disclose my own condition, typically when someone has achieved remission and is now shifting from the active receipt of chemo to the more passive surveillance mode that is most familiar to me. The post-treatment phase is filled with its own fears, often that “not doing something” will inevitably lead to the cancer returning. Recurrence is a very real & troublesome problem, but the terror of anticipated relapse should not negate the tremendous effort expended to achieve a disease-free state.
What is the most challenging thing about having MEN?
I feel very guilty about having passed on the disease to my son, but I’m also motivated to learn as much as I can about the disease for his benefit and for that of all MEN1 patients. The insights gained from treatment of sporadic (i.e. non-genetic) neuroendocrine tumors of the pancreas can be extrapolated in many cases to the MEN1 population, and there have been exciting therapeutic advances for these tumors in the last several years.
What do you wish more physicians knew?
I think the most crucial, or at least the most often overlooked, part of the medical history is the pedigree. There are few better ways to discern a patient’s future than to look at their family’s past. In my case, it was the shared symptom with my father that led me to connect the dots and identify a tumor syndrome in our kindred. It’s also a ‘tip of the iceberg’ phenomenon, insofar as once you find a single person with a genetic condition, you tend to find more when you delve into their bloodline.