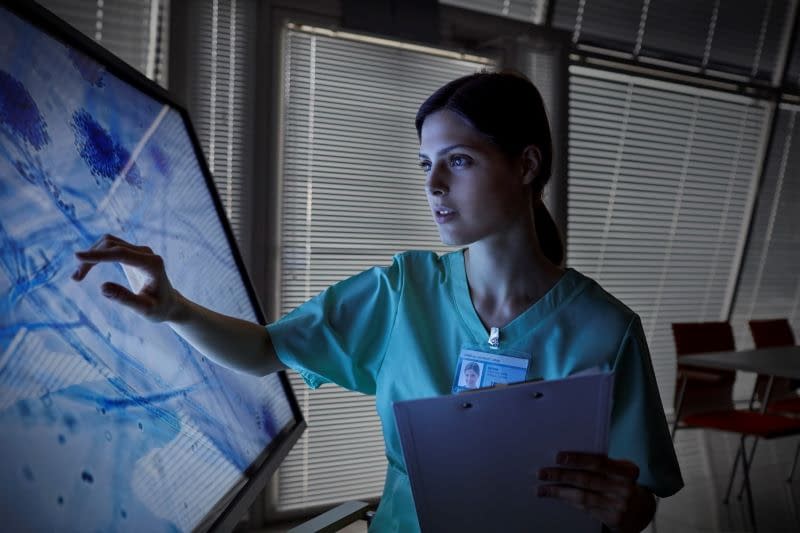 A woman in her 40s had surgery to remove a gynecologic tumor. During the procedure, the surgeon noted that she had numerous polyps in her small intestine that may be causing it to undergo intussusception, meaning one section of bowel slides into the next. The surgeon suspected Peutz-Jeghers syndrome (PJS), since intussusception and large, mushroom-like, or pedunculated, polyps are features of this inherited condition, known to significantly increase the risk of certain types of tumors, such as colon, pancreatic, stomach, breast, and ovarian cancer.

PJS occurs in individuals who have a pathogenic variant in one copy of the STK11 gene. The surgeon consulted colleagues with genetics expertise to help explore whether this woman had the condition. The patient saw a genetic counselor, who noted that in addition to the pedunculated polyps in the small bowel, this woman had other classical features of PJS, such as hyperpigmentation of the lips and fingertips.

According to practice guidelines, a PJS patient should be screened for gynecologic cancers via pelvic exam and pap smear, but preventive surgery like hysterectomy isn’t automatically recommended. As such, even with a timely diagnosis of PJS, the patient may have still developed gynecologic cancer. But Meagan Farmer, a genetic counselor and genetic clinical operations director at My Gene Counsel, reflected that in this case, whether the patient’s tumor was PJS-associated isn’t the main point of concern.

Even if her cancer was not due to PJS, misdiagnosis and delayed genetic testing are still concerning and impact patient care. It’s clear that this woman’s providers at this other institution weren’t aware of the clinical features that pointed to an inherited syndrome. “The challenge is that she was diagnosed with this condition late and this whole time she had been developing associated polyps,” Farmer said. “The polyps were mislabeled, and no one thought of this condition even though she had other symptoms of it.”

If earlier, someone in her care team correctly classified these polyps and recognized the other physical manifestations of PJS, such as the hyperpigmentation on the lips and fingers, then she would have likely been referred for genetic evaluation earlier, which in turn, would have confirmed PJS. An earlier PJS diagnosis may not have helped avoid this patient’s gynecologic cancer, but generally, correct polyp classification is critical when trying to diagnose an inherited syndrome, Farmer said. Furthermore, timely diagnosis and genetic testing of an inherited condition has implications for family members and their preventive care, she added.

“Classifying the polyps incorrectly was really important here and led to a missed opportunity for diagnosing this syndrome and therefore correct care,” she said. “Misclassifying polyps can be important just as misclassifying a cancer is.”

This patient’s polyps should have been classified correctly. Then, if doctors had considered this patient’s overall medical picture — her polyps and physical exam findings — then perhaps she wouldn’t have been misdiagnosed.

“There were multiple opportunities for someone to suspect that this was PJS, which is kind of disheartening,” Farmer said, noting that each provider in this case stayed in his or her own lane and failed to consider the patient holistically. “When you consider the multidisciplinary nature of this woman’s care, which included gastrointestinal pathology, surgical oncology, and genetics, it also reminds us that there can be many opportunities to get it right if we share the right information with one another.”

The surgeon, Farmer highlighted, did the right thing, by not only removing the patient’s tumor but also noting she had these other polyps and referring her to genetics to get to the bottom of it, which led to the patient’s PJS diagnosis. Similarly, when the pathologist from the other institution wondered why the genetic counselor was questioning the histological classification of the patient’s polyps, she took the chance to educate the pathologist about the features of PJS polyps.

Although it’s not possible for non-genetics practitioners to be familiar with every single hereditary syndrome, Farmer noted that providers should at least be knowledgeable of the clinical features of the hereditary conditions that can affect the patient population they are treating. “It can be really easy for busy clinicians to have blinders on and just focus on what’s in front of them,” Farmer said. “But if you’re a gastroenterologist who deals often with people who have polyps and there are a few distinct syndromes associated with polyps, you should probably familiarize yourself with these other clues so you can tell pathology to look out for a certain type of polyp or just refer to genetics experts if there is any doubt.”