Beyond BRCA: TP53 and Li-Fraumeni Syndrome 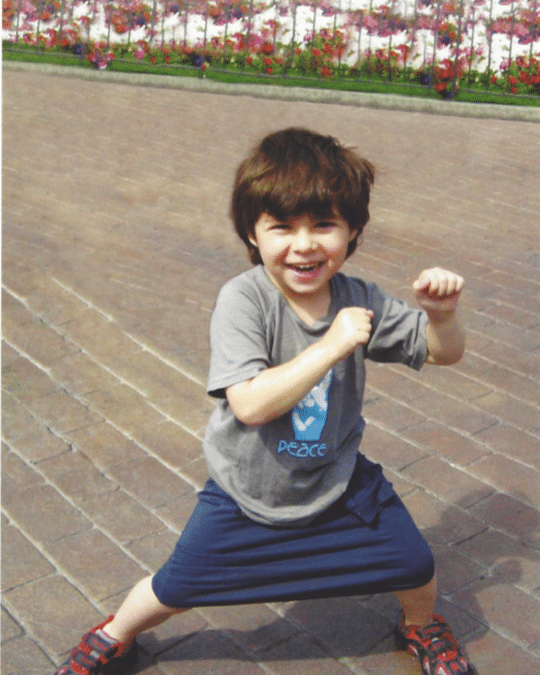 Genetic Counseling Note:
TP53 is a gene located on chromosome 17p that is often mutated, or changed, in tumors.  However, some people are born carrying one mutation in the TP53 gene in all of their cells.  These mutations are called germline mutations, and result in Li-Fraumeni Syndrome (LFS).  People with LFS have a high lifetime risk of developing many types of cancer, often at young ages.  These cancers include tumors of the breast, brain, bone, lung and leukemia, lymphoma, and soft tissue sarcomas, as well as many other cancers.  People with LFS are at risk of developing multiple primary cancers and are radiation-sensitive — meaning that if exposed to radiation, they are at increased risk to develop cancers in the field of radiation.  Germline TP53 mutations are passed down in families in an autosomal dominant pattern, meaning that a parent with a mutation has a 50% chance of passing the mutation on with each pregnancy.
TP53, p53, Li-Fraumeni Syndrome, LFS, pediatric cancers, brain tumors, adrenocortical carcinomas, soft tissue sarcomas, breast cancer

Marlo Gottfurcht Longstreet Founder and President of the Tanner Project Foundation ,  @tanner_project
Update October 2018: “My book, Rainbow Around The Son, just came out on Amazon.  It chronicles the days of Tanner’s illness, death and my determination to keep Casey healthy. Written in journal format, my words are very raw, real and say it like it is. It is, what I believe, a very important story to share and tell.”

Tell us about your son, Tanner

Tanner was the sweetest, funniest kid you could ever meet. He had some issues with speech & language, as well as processing, and was not a big fan of school.  He was the kind of kid that would act out one minute,  but then win Student and Athlete of the Year the next.  He truly charmed the pants off of people.  Believe me, he gave me a run for my money – he wasn’t easy!  But he was magical.  Tanner was very funny, had comedic timing and an appreciation of adult humor.  It wasn’t until after he was sick and died that I realized how many lives he touched.

When was Tanner diagnosed with cancer?

In September 2012 Tanner did not feel well.  He was 10 years old and starting 5th grade and had no appetite, a headache, and was feeling very tired and did not want to leave me.  One day he threw up at school and we took him to the doctor, who thought he had the flu.  They ran some bloodwork and everything came back normal.  After two more days, he still wasn’t feeling better. Our pediatrician just felt that something wasn’t right and suggested we take him to the emergency room.  Once there, they thought Tanner had meningitis, so they ran a routine CT scan of his head before doing a spinal tap. I’ll never forget it, the ER doctor came into the room, shut the door and said we needed to sit down.  They found a mass on Tanner’s brain and two days later he had brain surgery.  He was diagnosed with a glioblastoma.  So, in 2 days we went from the flu to meningitis to a brain tumor. The doctors wanted us to start radiation right away, every day for 6 weeks; however, we decided that we needed to take a step back and collect more information first.

How did you learn Tanner carried a p53 mutation?

We had a consult with a neuro-oncologist at Children’s Hospital Los Angeles and, for the first time, we were asked about our family history of cancer.  We told him that Tanner’s paternal grandmother was diagnosed with breast cancer at ~age 32 and died at age 49.  This physician recommended that Tanner have genetic testing and we learned that he carried a mutation in TP53.  We later learned Tanner’s father Greg and our daughter Casey, neither of whom have developed cancer, are also carriers.

What made you start the Tanner Project Foundation?

Tanner died 8 months and 8 days after he was diagnosed, and I wanted to keep Tanner’s memory alive.  Everything we’ve done has been done with so much thought and process, with Tanner’s spirit leading the way.

What are the goals of the Tanner Project Foundation?

My Dad and I had talked about the Foundation we’d create while Tanner was still alive, and decided that we wanted to find ways to catch cancer before it becomes cancer.  We wanted to monitor people at high risk to find the red flag before anything bad happens.
Our focus so far has been on cancer – studying an individual case from all aspects, in hopes of better understanding the disease. We like working and thinking outside of the box. We have been working with the J. Craig Venter Institute, Scripps, TGen and Metabolon, to creatively study one case in great depth.  We believe this is the answer to fully understanding and preventing disease.

What message would you like to get out to the public about LFS, childhood cancer, genetic testing?

It is so important to know that we can inherit hereditary cancer mutations from men or women.  Many people, including physicians, may not recognize that if a man has a family history of early-onset breast cancer, that may be significant and he should be offered genetic counseling.  These mutations can be passed on to both sons and daughters.

Knowledge is power.  I know people are scared to have genetic testing – we were too.  But the unknown is scarier.  In our quest to learn as much as we can, my entire family has had our genome sequenced.   There are things you can do if you’re at high risk. We didn’t know the information for Tanner, but we do for Casey.  We don’t want to ever be blindsided again.
Cancer can happen to anyone.  We were a healthy, happy family and life was good. No one is immune to cancer.
There are many people out there with apersonal and/or family history of cancer who’ve had BRCA testing and tested negative.  Some of those people may carry a TP53 mutation, or another hereditary cancer mutation.  Make sure you’re not just being tested for BRCA, technology has changed a lot over the past 5 years and many people are candidates for entire panels of genes related to hereditary cancers.   There are affordable ways to have genetic testing and counseling.
Check out Tanner’s Project on their website and follow their activities Twitter!
SaveSave
SaveSave