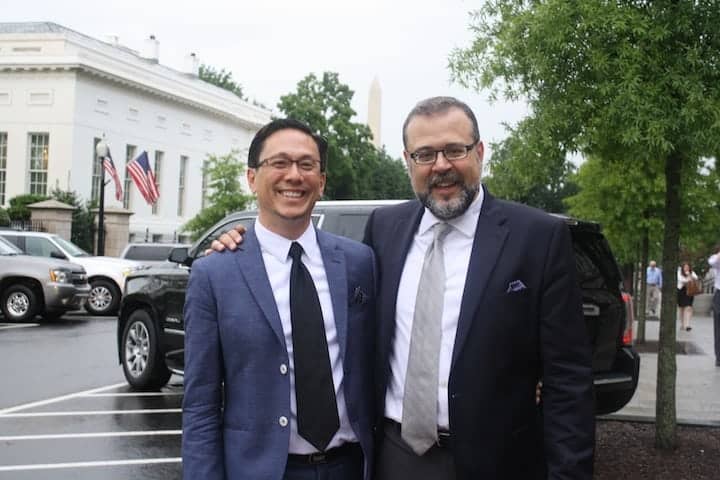 We recently interviewed Hugo Campos, a newly named White House Precision Medicine ‘Champion of Change,’ on his personal experience in the healthcare system and how he is working to shift ‘business as usual.’ Here’s what he had to say.

Ellen T Matloff: You were one of nine people recently honored at the White House as a Precision Medicine ‘Champion of Change’, which is a huge achievement. Congratulations!

Hugo Campos: Thank you so much. I was very honored and surprised to be among the nine folks selected. But really, there is a entire movement of people doing amazing work  toward our shared goals of better care and more transparency.

Hugo (right) with spouse of 19 years, Paul, at the White House

ETM: What is your background and backstory?

HC: At age 37 I was healthy person with no medical concerns and then, after running up the stairs to a commuter train, I had a sudden cardiac event that landed me in the emergency room. My heart was beating very fast and wouldn’t slow down. I had never before had any interactions with the health care system so it was quite surprising for me to learn, after being misdiagnosed, that the health care system doesn’t always work perfectly. It took me three years to receive the correct diagnosis and treatment.

My correct diagnosis is hypertrophic cardiomyopathy (HCM), which is essentially a thickening of the heart muscle. It is the #1 cause of sudden cardiac death in young adults, and affects 1/500 people. In retrospect, I had palpitations, but thought it was a normal result of diet or stress at work and certainly never thought it could be life threatening.

HC: I met a woman online named Lisa Salberg who started the HCM Association and she was incredibly helpful to me. She helped me find the HCM Center of Excellence at Stanford and things finally started making sense because they understood the condition.

I was told I was at risk of a sudden cardiac arrest and needed an implantable cardioverter defibrillator (ICD) immediately. I had just three days to decide upon which ICD I wanted to implant. It was overwhelming. I had a very short period of time to make a critical decision about my own health. I began learning about my own condition and became motivated to learn as much as I could about cardiac rhythm management. It was then that I learned about remote monitoring, a system where patients’ cardiac events can be reviewed by doctors without the need for regular visits to the clinic. But it never occurred to me that I, as the patient, would not have access to the data collected via remote monitoring. I was told that patients cannot understand their own data, and that lit a fire in me – I became very angry, because this was my data and I had a right to it. It was then that I started saying patients need access to their own data. At first it seemed everyone was against this concept, including other patients! There were concerns that if patients had access to their data we’d be bothering our clinicians with unnecessary questions or edging doctors out of the care circle.

I started speaking about patient access to data, writing about it, and I started an in-person group to discuss these issues. Then I expanded to like-minded people outside of my HCM community who were interested in patients getting access to their own data. I began attending Health 2.0 and other conferences (Quantified Health, Participatory Medicine followers of Dr. Tom Ferguson) and the wave was starting to rise.

ETM: Of which achievement are you most proud?

HC: The recognition by the White House is really incredible. I remember being on the West Lawn for an interview with NBC and I lost it, I started crying. I thought, ‘They heard us. We’re in the White House, and they finally heard us.”

ETM: What advice do you have for patients who wonder how they can make a difference?

HC: We all have the ability to make a difference – it may seem like you don’t, but you do. In your own care, it starts by becoming engaged . Participate in every aspect of your own health. Comment online.  Share information. Exercise your rights. Ask for copies of your records. Be proactive, positive, constructive and firm. Expect and demand that you’ll be respected. Take responsibility for yourself.

Hugo (right) with his father