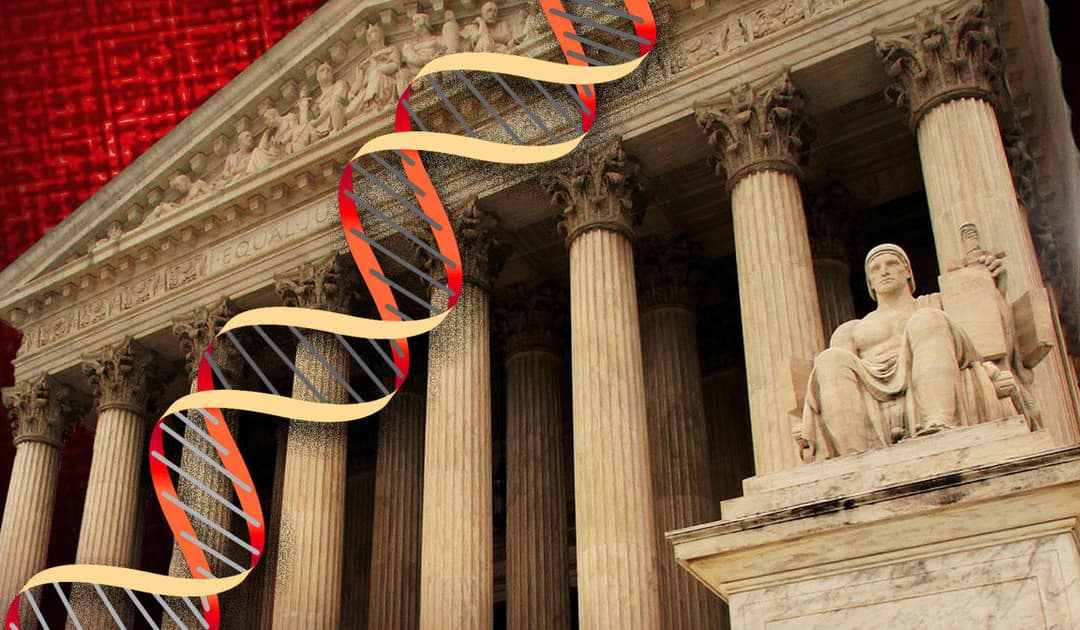 Today, June 13th, 2018, marks the 5-year anniversary of the Supreme Court of the United States’ Association for Molecular Pathology v. Myriad Genetics case regarding the BRCA gene patent. The result was a unanimous decision: genes could not be patented as they occur naturally.

We reflected back on this day, how far we have come, and where we are going…

As a litigator, the oral argument at the Supreme Court will always be special for me. From the ceremony of walking to counsel’s table and taking in Justice Sotomayor’s warm smile, to quickly thinking of responses to the Justice’s questions and opposing counsel’s assertions. But what struck me the most was not the legal argument itself.

It was incredibly meaningful to see, in one place, so many of the amazing people who joined together to support the lawsuit to end gene patents. Several of our plaintiffs, who had bravely brought the case, were there, as were many leading figures from the genetics and cancer world. Uniting such a diverse group of activists, clinicians, patients, government officials, researchers, and attorneys in this advocacy was one of the most powerful strategies we used, and one that I am most proud of to this day.

I was not expecting the decision to come out on June 13th. Sitting at my desk, I was working on a brief and monitoring SCOTUS Blog, just in case. I was surprised when it was issued and even more shocked – and overjoyed – that it was a unanimous 9-0 decision striking down gene patents. The rest of the day was a mad rush of processing the opinion and its ramifications, spreading the word to our plaintiffs and supporters, and talking with the media.

The win at the Supreme Court lifted a major barrier to patients’ access to genetic testing, the development of new and more comprehensive tests, and genetic research. If companies were still authorized to lock up individual genes for their own use, they would be able to dictate patients’ access to their own genetic information and researchers’ ability to study genes and their relationship to disease and possible therapies. The Supreme Court’s decision was crucial to ensuring that monopolies on genes do not block patients’ decision-making for themselves and their families or the future course of genetic research.

My most vivid memory from that time is getting up early and walking about a mile to the Supreme Court Building. I replaced my line stander at 7 AM and was number 59 in line when 60 were let in.

I was at a meeting in Big Sky, Montana when I heard the verdict. The most important thing the verdict has done for patients, research, and genetic testing is eliminate the monopoly that Myriad had on testing. It stopped companies from patenting our genes.

It is hard to believe that it has already been five years since that famous verdict came out. The first phone call I received was from a Philadelphia Inquirer reporter who asked me how I felt. I just said I was very happy because women now had a choice. Haig also called and said he had a special interview planned, so that he could issue a statement.

But the most memorable event for me was my trip to SCOTUS with Haig in April of 2013. It was definitely a once in a lifetime experience, and I will never forget that. Especially getting the tickets for entering SCOTUS. My ticket number was 22 and Haig’s was 59.

Things have changed so much since then. I am glad to have been a part of history.

I have so many vivid memories from the day of going to SCOTUS. One is sitting outside the courtroom with Chris Hansen before he went in to argue the case. We were reflecting on all that had come to pass to bring us to this day. And I was marveling at how cool, calm, and collected Chris seemed compared to me! He was ready!

That, and grinning ear to ear when Justice Sotomayor said that isolated DNA was “just nature sitting there.”

I was sitting in a meeting at FDA when I heard the verdict. My phone started buzzing like crazy and I knew it meant that the decision was in. I glanced at the subject headings, jumped up, and exclaimed, “We won!” I ran back to my office, downloaded the decision, and called Chris Hansen to revel in the victory!

This verdict has given rise to a new business model for diagnostic testing. One focused on quality, affordability, and patient experience, rather than market dominance and data hoarding. Many more patients have access to testing. Research is advancing more rapidly. And a single company can no longer dictate the standard of care.

My whole family showed up in support of the SCOTUS rally. It was a family affair! I’d had a really difficult year recovering from surgeries. Having the chance to speak in public as an advocate on that historic day was incredibly empowering. It helped me to move forward from some of the loss that I had experienced due to BRCA.

I was at home with my husband when I heard the verdict. Everyone started texting and calling me. I was so happy and excited!

Before the verdict, Chris Mason published a paper estimating that roughly 41% of the human genome had been claimed by patents. It is amazing that this case was an important step to open up research on BRCA and other genes.

I think it was the first time we recognized how strong and powerful the voices of BRCA advocates can be. I awakened to the possibility that the BRCA community is part of something bigger. As genetic testing and personalized medicine continues to evolve, it’s important for us to be informed and educated about these issues as consumers. We will continue to need a unified voice as advocates to ensure that various industries are not overlooking the best interest of the BRCA community.

On June 13th, the Ovarian Cancer Project, the small non-profit I founded in the fall of 2012, was participating in a huge corporate health fair. Despite the noise, I heard my phone ringing and answered it. It was a producer from NPR asking for an interview later that morning. Robyn Shepard (ACLU) had told me the week before that NPR (Boston) would be calling me at some point. I told the producer that I was really busy and maybe we could schedule the interview for some other time. The person on the other end of the phone seemed a bit perplexed, thanked me, and hung up.

A bit later, I checked my cell phone. A text from Mollie Hutton, my genetic counselor read “you won.” Immediately, my phone rang again. This time it was Rich Wolf from USA Today wanting my reaction to the decision. The next call was from our local Buffalo News health reporter. He was a bit snotty with me, as he never agreed with our position. He had an interview with a local law firm that came down solidly on the side of patents. These phone calls were like gold that day. No one locally really understood the impact of the case.

I think access to low-cost testing made the most powerful and important impact in health care in recent history. Sadly, for me, the one thing that I was most frightened of, and the thing that drove me to want to be a part of the case was that women who had been tested by Myriad and thought, like our family, that we were given the most comprehensive test, now thought they were safe from a cancer diagnosis. These families still haven’t been contacted to receive the most current testing available.

My most vivid memory from the day of going to SCOTUS was hearing the Justices talking about genes and genetics by using analogies of chocolate chip cookie recipes and a branch falling off of a tree and floating down a river until it formed into a baseball bat. It made me realize how little even the Justices knew about genetics!

I had just attended my daughter’s preschool graduation when I heard the verdict. We ran to the car in a total downpour and were soaking wet. My phone was in the car and was blowing up with texts and voicemails. My friend Debbie’s text read simply, “You won!!!” I started bawling.