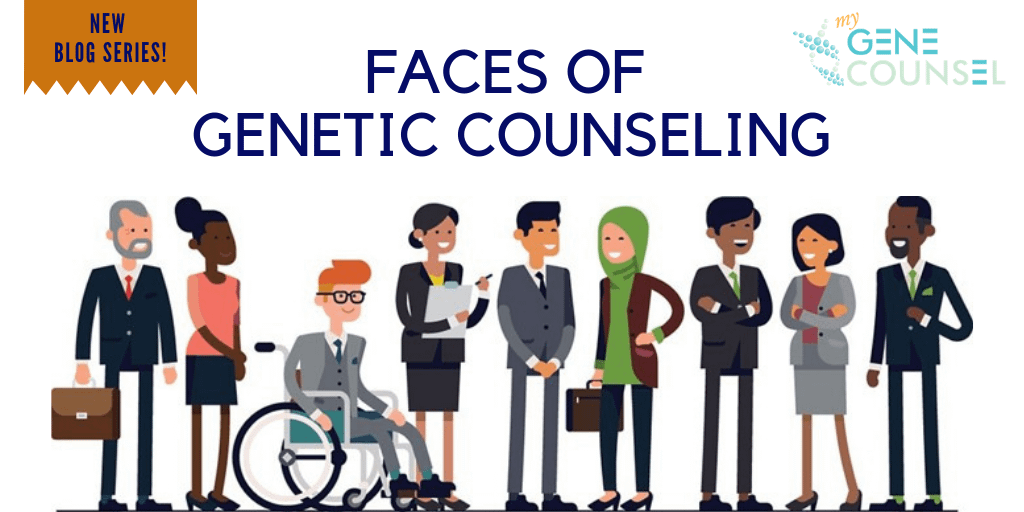 In the blog series, “Faces of Genetic Counseling,” we highlight genetic counselors who come from diverse backgrounds and serve as representatives and advocates within their field.

We had the opportunity to speak with Nick Little, MS, a recent graduate of the University of Cincinnati College of Medicine. Nick was one of just 12 graduates – and the only male – to receive a Master of Science in Medical Genetics for the class of 2019. With women comprising 95% of the genetic counseling profession, Nick spoke to us about his experience being one of the few males in the female-dominated field.

What comes next now that you’ve graduated?

I have accepted a position at the TriHealth Cancer Institute in Cincinnati, Ohio. I will be meeting with cancer patients and people with a strong family history of cancer. Our institute has expanded its genetic counseling staff and services, which I’m excited to be a part of.

How did you learn about the field of genetic counseling?

I have always been interested in genetics because a close friend of mine has Duchenne muscular dystrophy, but I didn’t know about all of the career options in genetics. I first heard about the field of genetic counseling towards the end of my sophomore year at Xavier University, where I completed my undergrad. In my genetics class, my professor had us calculate recurrence risk and evaluate inheritance patterns, and she briefly discussed genetic counseling as a career option. The more I looked into it, the more I realized it encompassed many aspects I really enjoyed, such as genetics, education, counseling, advocacy, and cutting-edge research and technology.

When did you discover that most genetic counselors are female?

While looking into different genetic counseling programs, many posted pictures of their graduating classes and genetic counseling faculty on their websites, and I saw either all female classes or just one or two men in the pictures. And when I shadowed genetic counselors, they told me there were few males in the field.

Did that discourage you from becoming a genetic counselor?

It did not; however, it was a bit intimidating as a prospective student. I wondered if I would be able to make friends easily and how I would fit in among my peers, but there was a similar gender disparity in education, which was part of my undergraduate major.

What has been hard about being part of the minority?

I didn’t have any male genetic counseling supervisors, and I had few male classmates. As a white male, I almost feel like I’m not allowed to feel like a minority, and it makes me feel silly for sharing my perspective. Some assumed that I couldn’t build rapport with female patients, especially those who were pregnant. Others assumed that as a male applicant, I was likely accepted with fewer qualifications. Those assumptions can be hurtful.

As a male genetic counselor, I sometimes feel stuck between a rock and a hard place. I feel like I can offer a fresh perspective, but it’s often a constant check of my privilege as a white male. Although I am clearly a minority in our field, it almost feels as though a white male can never claim to be a “minority,” and I often feel shortsighted and disrespectful in doing so. Because of this, I frequently feel conflicted and, in a way, it can feel even more isolating. The diversity initiatives by the National Society of Genetic Counselors are both encouraging and energizing. I think we need to have more discussions about how male genetic counselors and male genetic counseling students fit into these initiatives.

How has the predominantly female ratio affected you the most?

There are some situations where comments are made regarding gender that can feel isolating. From time to time, families seen for follow-up at the children’s hospital would comment that they typically only see women. I can recall a time when I went to a restaurant with my classmates and an elderly gentleman joked that I had many girlfriends. In one of my clinical rotations, a patient talked about not knowing the paternity of her child. My supervisor said that I handled the case very well and did a great job in that situation “as a male.” This felt like a qualification was added to the feedback I was receiving. Did that mean I did a great job as a genetic counselor, or a great job considering that I was a male genetic counselor? Sometimes it felt like I was being praised for not being a good genetic counselor, but for being better than you’d expect a male student to be under those circumstances. These types of comments would sometimes make me feel out of place.

What advice do you have for other males who may be considering entering the field of genetic counseling?

Don’t let any worry of isolation or how you’re going to fit in influence what you want to do or hope to accomplish. Reflecting on my time as a student, I initially felt some added pressure to excel academically, be on time, and perform well in clinic because I felt like I stood out. But over time, those feelings subside. I am close friends with so many of my student peers. It’s all about finding a career you think you would enjoy. If you feel that way about genetic counseling, stick with it – it will all work out.