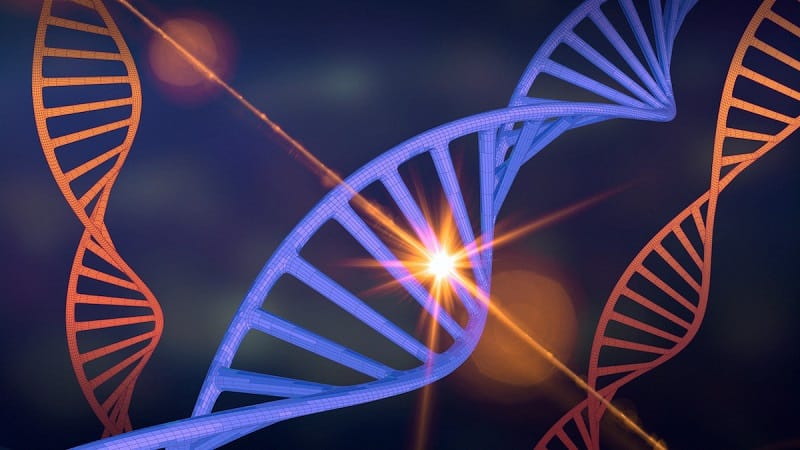 This is part of a series of articles written to highlight rare hereditary cancer syndromes. In this interview, Heather shares her story of living with Cowden syndrome.

Genetic Counseling Note: People who have a mutation (also known as a pathogenic variant) in the PTEN gene can have one of several different disorders, including Cowden syndrome. Individuals with Cowden syndrome are at increased risk to develop several cancers, including cancers of the breast, thyroid, endometrium (lining of the uterus), and kidneys. People with Cowden syndrome often have macrocephaly (larger than average head size), characteristic benign skin findings, and colorectal polyps. Lhermitte-Duclos disease, autism, and other features can also be part of this syndrome. Cowden syndrome is variable – not every person with this condition will have every possible feature.

Tell us a little about yourself, Heather.

I’m 43-years-old. I like to read, crochet, and occasionally play the piano. I also love to do genealogy work and research my family history. I have two cats, named Kona and Tigger. I live with my family. My mom is a huge support to me, and I would not be where I am today without her. Before being diagnosed with two brain tumors, I had hoped to be a special education teacher. I now work on-call as a substitute teacher, but I am having a difficult time maintaining full-time employment because of my medical management.

How and when did you learn that you have a PTEN mutation?

I experienced symptoms in July 2011 that warranted a brain scan, after which I learned I had two separate brain tumors. Following a 13-hour surgery, the tumors were found to be benign gangliocytomas, also known as Lhermitte-Duclos Disease. My neurosurgeon said, “I think you have Cowden syndrome.” I had my blood drawn for genetic testing and learned I have a mutation in the gene called PTEN, which means that I do, in fact, have Cowden syndrome. I had previously survived thyroid cancer in 2003. The thyroid cancer diagnosis makes complete sense now because I had a huge goiter that was 10 times larger than normal. Since my diagnosis in the fall of 2011, I have had my uterus and ovaries preventively removed.

Do any of your family members have this mutation?

None of them have interest in being tested, which has been a hard pill for me to swallow. I have not had one person in my family who has breast, uterine, or thyroid cancer and have no known family history that is consistent with Cowden syndrome.

How has learning that you have a PTEN mutation changed your life?

I struggle with feeling disconnected from people. My life now includes constant doctor appointments, and I sometimes miss my “old” life. Many people don’t understand this new life of mine and are unable to relate to it. Having the knowledge that I could potentially develop cancer someday makes me feel different, and I don’t like that. It is a constant struggle for me to manage the emotions surrounding this.

Has anything positive come from this diagnosis?

I see my family through different eyes. I’m appreciative, grateful, and thankful for the family that I have. I don’t know if I can yet say I am “thankful” for the brain tumor diagnosis, but if it weren’t for that diagnosis, I don’t know how I would have ever been diagnosed with Cowden syndrome. Through social media, I have connected with amazing people who are also living with CS, who give me the strength and hope to take each new day as it comes. I know I have my own struggles, but connecting with others gives me the courage to take the next step. While I was recovering from the brain surgeries, I had many people praying for me, even strangers. Once I hit the year mark of recovery, I decided to pay it forward and chose to volunteer as a Literacy Tutor.

What would you like people to know about PTEN and the associated syndromes?

That it is manageable. Although it’s considered rare, there are many of us out there. You are not alone. Once you get “used” to this diagnosis, it does get easier. Four years ago, when I found out about this, I felt like my world was going to crumble. And then I met other people out there who also have it, and it gave me strength – you are not alone.

BRCA has received a lot of media attention since Angelina Jolie’s disclosure. How does that make you feel?

I want other women who are at high risk for breast cancer (but have a mutation in a gene other than BRCA1/2) to feel that they have a voice, too. Sometimes, because fewer people know about PTEN, it feels like our situation is less important and less serious. It’s not a competition of course, but it has encouraged me to be more vocal about my situation. I am not BRCA positive, but I am at high risk to develop breast cancer, too. I wish Ms. Jolie would have raised awareness for ALL hereditary cancer syndromes – that is what I’m hoping and helping to do!

This article was originally published in November 2015.