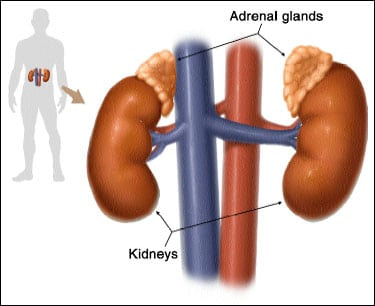 Photo credit to MLobliner  via Flickr
Pheochromocytomas are rare nervous system tumors that are usually benign and develop in the small glands that sit on top of the kidneys, called the adrenal glands.  Everyone has two adrenal glands that produce hormones that travel throughout the body to give instructions to other organs and tissues.  Tumors are often classified based on the body system they originate from.  Pheos are considered neuroendocrine tumors, originating from nervous (neuro) and endocrine (hormone-producing). NeuroEndocrine Tumors are often abbreviated NET.

Photo credit to NET Cancer Day
While pheos are usually benign (non-cancerous), it is possible for them to be cancerous.  Most people who develop a pheo are between the ages of 20 and 50, but this tumor type can develop at any age.
Because pheos can cause the body to release too many “fight or flight” hormones, symptoms may include: high blood pressure, sweating, rapid heartbeat, tremors, shortness of breath and headache. These symptoms often occur in brief spells of 15 to 20 minutes. Spells can happen several times a day or less often.
Certain activities, situations, foods or medications may trigger symptoms, including:

If left untreated, a pheo can result in severe or life-threatening damage to other body systems, especially the cardiovascular system. Surgery to remove the tumor is usually required.
Most individuals who develop a pheo do not have any previous history of these tumors or any family history of these tumors.  However, research has shown that even in these apparently isolated cases, at least 1/4 individuals who develop pheos are born with a hereditary predisposition to develop these tumors. Red flags for a hereditary reason for pheo devleopment include younger age of diagnosis, multifocal tumors, and the presence of paraganglioma, another type of neuroendocrine tumor, in a personal or family with pheos.  Learning about a possible hereditary predisposition is important for that individual’s medical care as well as that of their family members.

Pheos can be associated with the following hereditary syndromes:

Some experts recommend that all people with pheos be offered genetic testing. Genetic testing is most likely to be positive if following charcateristics are present in person/family: